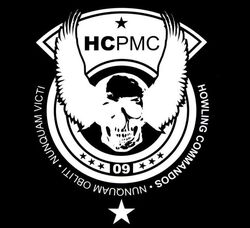 After the Secret Invasion, when S.H.I.E.L.D. was deemed "compromised" and dismantled, most of the agents were given the option to join the newly-formed H.A.M.M.E.R. organization. But not everybody accepted. They refused to serve under Norman Osborn, and so, they formed the Howling Commandos Private Military Company.

Though at first the Company tried to be selective in their clients, they soon realized what a rough business it is.

The team was later hired, along with Black Widow, to rescue journalist Uri Friedman kidnapped by a terrorist group in Somalia by his newspaper's insurance company. They successfully attacked the vehicle the terrorists were using to move Friedman and took down to enemy helicopters. They were successful in rescuing Friedman and getting him to safety.[1]

Like this? Let us know!
Retrieved from "https://marvel.fandom.com/wiki/Howling_Commandos_Private_Military_Company_(Earth-616)?oldid=6224544"
Community content is available under CC-BY-SA unless otherwise noted.