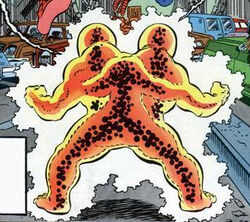 Hubert and Pinky Fusser were identical twins but lived vastly different lives. While Hubert was a scientist working for a research firm, Pinky was a janitor working for the same company.

An accident occurred during one of Hubert's experiments; Pinky ran to his brother and the two merged into one being.

Hubert planned to use their powers for questionable experiments. Pinky disagreed. While battling Spider-Man (Peter Parker), the two were separated.[1]

He was captured by the enigmatic alien, the Stranger, and were imprisoned in the Stranger's Labworld for the alien to study him. He remained there until freed by Overmind.[2]

Hubert and Pinky did not agree with each other.

Like this? Let us know!
Retrieved from "https://marvel.fandom.com/wiki/Hubert_%26_Pinky_Fusser_(Earth-616)?oldid=4679374"
Community content is available under CC-BY-SA unless otherwise noted.