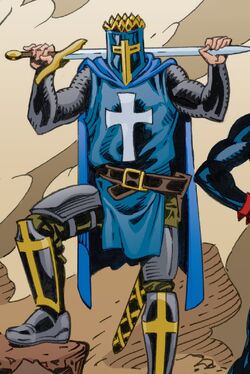 Ned Chapel was a manor blacksmith on the Armatage Estate who was was gifted with the enchanted armor of Sir Steel. He fought for England during the First World War, and joined the Freedom's Five.[2][3]

In 1917, when the Freedom's Five were in their base planning an attack on a mad scientist called Dr. Ursula Frankenstein, the heroes received a message that mysterious creatures were attacking the streets of London, which were later revealed to be invaders from Mars. The invasion was repelled with the help of a mysterious team with high-tech led by a man later identified as Eben Stafford, and the aliens were forced to flee.

He was an excellent swordsman and hand-to-hand combatant.

He brandished a sword.

Like this? Let us know!
Retrieved from "https://marvel.fandom.com/wiki/Hugh_Dare_(Earth-616)?oldid=6118567"
Community content is available under CC-BY-SA unless otherwise noted.