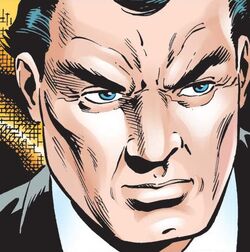 Hugh Jones was the president of Roxxon Oil.[1]

He was kidnapped by Madame Viper and her Serpent Squad and was forced into contact with the Serpent Crown of Lemuria.[1][2][3]

This evil influence later precipitated Jones to lead a criminal conspiracy to overthrow the U.S. Government. He conspired with Buzz Baxter to hire the Squadron Supreme to defeat the Avengers[4][5] and transported them all to the Squadron's universe,[6] where the President of the US was also under the control of the Serpent Crown.[6][7] He was eventually defeated by the Avengers after they returned from the Squadron's world and Thor overcame the crown-controlled Orka.[8]

Jones continued to have a mental link with the Serpent Crown and was able to locate the crown even though the Vision disposed of it in the Atlantic Ocean. Later the Thing was able to separate Jones from the accursed crown.[9]

Unfortunately for Jones, breaking the link between Jones and the Serpent Crown caused the chairman to become mentally ill. He was eventually replaced as the president of Roxxon.[10]

Like this? Let us know!
Retrieved from "https://marvel.fandom.com/wiki/Hugh_Jones_(Earth-616)?oldid=5711216"
Community content is available under CC-BY-SA unless otherwise noted.