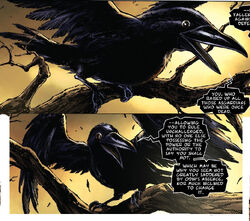 Hugin and Munin were the ravens of Odin. He would send them out into the Nine Worlds each day to learn what was transpiring.

When Malekith began his endgame in the War of the Realms, he sent a band of Dark Elves to assassinate Odin.[2] While Odin managed to repel his assailants,[3] either of Hugin and Munin was killed.[2]

Hugin possess enhanced strength, endurance, and agility. He can travel across any dimensional barriers and are immune to all holding spells. Hugin is highly intelligent, capable of speech and able to differentiate between individuals like all Midgard ravens. He can perceive his surroundings while moving at high speed and execute aerial maneuvers.

Like this? Let us know!
Retrieved from "https://marvel.fandom.com/wiki/Hugin_(Earth-616)?oldid=5743549"
Community content is available under CC-BY-SA unless otherwise noted.