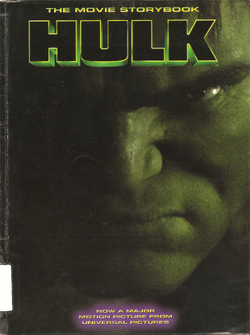 Near San Francisco, scientists Bruce Banner and Betty Ross experiment the effect of nanomeds on frogs. One day, Bruce Banner accidentally inhaled the nanomeds and got blasted by gamma radiation. The doctor in the lab's infirmary could not find anything wrong with Bruce and a visitor named David Banner tells Bruce he is his birth father. David had worked as a military scientist to change his genes withstand high amounts of radiation and Bruce had inherited these genes. Bruce tests his blood back in the laboratory and soon turns into the Hulk, destroying everything in sight. Betty's father General Thaddeus "Thunderbolt" Ross comes to Bruce's house to put him under house arrest and to warn Betty to stay away from Bruce.

David calls Bruce, hinting that he was going to hurt Betty. Glenn Talbot shows up to pick a fight and to threaten a hostile takeover of Bruce's lab. Angered by Talbot's indifference, Bruce turns into the Hulk and smashes out of his house to find and protect Betty from David's vicious Hulk-Dogs. Betty calls her father to take Bruce to a military base in the desert where Bruce had spent most of his childhood. A damaged Talbot orders Betty off the base and tries to collect cells from Bruce to trigger a chemical distress signal, once again turning Bruce into the Hulk. The Hulk bounces around the desert and San Francisco Bay while General Ross's army tries to subdue him until Betty calms him down.

Retrieved from "https://marvel.fandom.com/wiki/Hulk:_The_Movie_Storybook?oldid=5520557"
Community content is available under CC-BY-SA unless otherwise noted.