David Banner (father of Bruce Banner, the Hulk) is a genetics researcher who experiments on himself, trying to improve on human DNA. Once his wife gives birth, he is concerned about how his modified DNA might affect his son, Bruce. Young Bruce is a withdrawn and closed child, rarely outwardly expressing emotion in extreme cases. The only physical effect of his mutated DNA is the strange patches of green skin that appear when he feels intense emotions. His father, under extreme guilt for his unintentional damage to his son, is feverishly attempting to find a cure for the child's condition when the government, represented by General Thaddeus "Thunderbolt" Ross, shuts down his research after learning of his dangerous experiment. David Banner, in a fit of rage, causes a massive explosion of the facilities' gamma reactor. After the accidental death of his wife, David Banner is locked away while Bruce is sent into foster care. During his life, the repressed memories of his parents and his young life manifest themselves as intense nightmares that leave the young Banner shaken and disturbed but unable to conjure the memories.

The movie then advances twenty years to when Bruce Banner, a brilliant researcher at the University of California, Berkeley, uses nanobots to regenerate living tissue. The nanobots are activated by Gamma radiation, but all experiments result in out of control cellular growth and the death of the test subjects. The Military-industrial complex, represented by the unscrupulous Major Talbot, becomes interested in the research to build self-healing soldiers. David Banner reappears and begins infiltrating his son's life. "Thunderbolt" Ross, now an army General, also begins to investigate when he learns of Bruce's involvement in the research through Talbot. Ross, the estranged father of Bruce's ex-girlfriend and co-researcher Betty Ross, becomes concerned both for his daughter's safety around Banner, but also because Bruce is working in the same field as the father he does not remember. A laboratory accident involving the nanobots and gamma rays results in Bruce's transformation into the Hulk.

Banner's and the Hulk's battles are fought on many levels in the film. On the surface, the Hulk's nemesis is the military commanded by General Ross. Seeing Banner and the Hulk as a threat based on his perception of David Banner, he orders Bruce sealed away from the world, and by extension, from his own daughter who refuses to give up on her former lover. On the other side of the military equation is Talbot, whose primary concern is learning the secret locked in Bruce's DNA and replicating the experiments that resulted in his transformation. His goal is simply to patent the discovery and reap a fortune by selling it to the military. On a lesser note, Talbot is jealous of Banner. Having been a college love interest of Betty Ross, Talbot cannot cope with the idea that she could possibly have feelings for the apparently weak Banner.

Both Banner's and the Hulk's ultimate foe ends up being Banner's father. The elder Banner, having become completely obsessed with Bruce during his incarceration, conducts his own experiments at copying Bruce's transformative abilities, resulting in his ability to absorb and replicate the properties of various forms of matter and energy. After allowing himself to be captured, David Banner confronts his son under the guise of attempting to make amends. His true goal is the use of his emotional impact to enrage Bruce and trigger the Hulk transformation. The now completely mad David Banner needs the Hulk's unique abilities to stabilize the cellular reaction caused by his experiments, allowing him to fulfill undisclosed, megalomaniacal aspirations. This results in a two front, father/son battle; the Hulk versus David Banner's trans-formative powers, and the psychological battle of a deranged father attempting to subjugate the will of his son. Both Bruce's inner strength and the Hulk's outer power prove to be too much for David Banner, saturating his cells' absorption abilities and sending his powers out of control. A last ditch effort to stop the two monsters with a high energy gamma bomb, ordered by General Ross and launched from an F-22 Raptor, results in the destruction of David Banner. In the destruction that follows, Bruce Banner goes missing.

The end of the film finds Betty Ross and her father operating under close, yet strained conditions as the elder Ross tries to balance his attempts to comfort his daughter's loss with his mission to find Banner. As for Banner, it is unclear what his goals are. However, the film's final scene suggests that Banner has made the decision to direct both his and the Hulk's abilities to helping those who need it (very much like the protagonist of the television series). Bruce is last seen treating a boy in a South American jungle when guerrillas arrive and demand the medicine. The leader speaks to Bruce threatening him. He then says the famous lines (in Spanish): "You're making me angry, you wouldn't like me when I'm angry". The shot pulls up as his eyes turn green, the rain forest is seen from a bird's eye view, the Hulk's roar is heard seconds later.

The movie was not well-received by audiences and experienced a second-weekend box office drop of 70%, the second-largest drop ever recorded for a movie that opened as the top box office draw its opening week. [2]

Others praised the film's action sequences, the use of symbolism and visual metaphors, and technical effects, but felt the overall pacing was much too slow and dramatic. 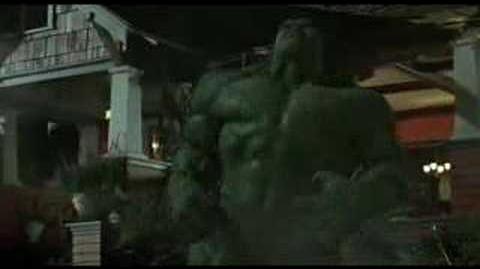 Many fans of the comics also felt that the filmmakers re-imagined the Hulk character in a manner that failed to grasp his appeal, changing him from a symbol of frustration and pent-up anger into the passive victim of parental abuse. While the abuse aspect had been present in the comic since the late 1980s under-writer Bill Mantlo, there it was building on an already well-established character and was part of a much more complex storyline.

While not a box office bomb, the film fell well short of Universal's financial expectations. Reception from mainstream critics was generally lukewarm to negative, often criticizing the film for being overly serious. The New York Times critic A.O. Scott called it "incredibly long, incredibly tedious, incredibly turgid," and Entertainment Weekly wrote that "a big-budget comic book adaptation has rarely felt so humorless and intellectually defensive about its own pulpy roots". MSN Movies ranks Hulk as the fifth worst superhero movie to date, behind Batman and Robin, Daredevil, Catwoman, and the 2005 Fantastic Four film.[3] However, critic Roger Ebert praised the film for its "dramatic ambition" and gave it a fairly positive review.[4]

One month before the release of Hulk, a non-finalized "bootleg" was circulated. It was complete except for the vocals, grunts, roars and so forthcoming from The Hulk. Fans feel that film was lackluster for an Ang Lee film and after seeing the bootleg decided not to attend the theater release.

The movie had these tie-in books and video games:

Many different scripts and directors were attached to this movie and some scripts had many villains like three "insect men" and a terrorist named Novak.