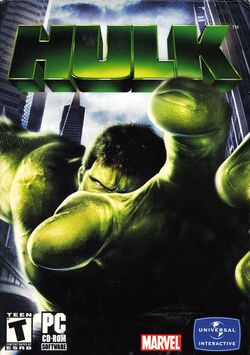 The game opens eight years after the movie, in a dream sequence where a man named Bruce Banner transforms into a large and powerful monster dubbed the Hulk and destroys waves of soldiers and tanks sent by the military to attack him. Upon awakening, Bruce Banner is contacted by his old mentor Dr. Crawford who explains that he has developed a cure for the Hulk called the Gamma Orb. Unfortunately, military troops led by the corrupt General John Ryker have raided the lab. Bruce Banner sneaks into the lab and discovers that General Ryker wants to obtain the Gamma Orb. After reaching Dr. Crawford, Bruce allows his old mentor to use the Gamma Orb on him, but Crawford betrays Banner and uses it to steal the Hulk's energy. Crawford touches the Orb and absorbs a part of Bruce Banner's power transforming himself into a Hulk-like creature called Ravage. Simultaneously, Banner transforms into the Hulk. After a chase of Ravage over rooftops and through sewers with Ryker's forces in hot pursuit, Hulk finds himself at a dead end where he is ambushed by the vampire Half-Life. Hulk defeats Half-Life who explains that Ravage has taken the orb to Alcatraz but will kill a hostage there if the Hulk is detected.

Bruce infiltrates Alcatraz which has been secretly occupied by the Leader and his private army. Bruce deactivates the Gamma detection device using a security terminal which shows live footage of a Gamma chamber used to mutate the Leader's henchmen into Gamma-irradiated super soldiers. It also shows the Leader's psychotic brother Madman taking the hostage Betty Ross to the irradiation chamber after being ordered by a mysterious voice to "dispose" of her when she refuses to further aid them in their schemes. Seeing Betty in distress causes Bruce to transform into the Hulk decimating the research facilities and defeating Madman after disabling the irradiation chamber. Betty tells the Hulk that she has been exposed to the Gamma radiation and must be taken to the military Gamma base. The Hulk takes Betty to the base, but is incapacitated by a force field. Bruce is sedated and strapped to an operating table where General Ryker plans on dissecting him. Betty frees Bruce, who (disguised as a soldier) formulates an antidote, transforming into the Hulk and fighting the military while trying to find and destroy the shield generator. Hulk finds the generator, but is confronted by Flux, a Hulk-like soldier. The Hulk defeats Flux and throws him into the generator, destroying it.

Hulk escapes and returns to Alcatraz. After fighting through the Leader's forces as Hulk and Bruce Banner, Hulk finally confronts Ravage, who was guarding Leader's teleport device. Ravage is defeated and returns to the form of Dr. Crawford. Crawford informs Bruce that the Gamma Orb is at Leader's control center (called New Freehold) and Bruce teleports to it. After being ambushed by Half-Life and Madman, Bruce once again transforms into the Hulk and confronts them. Madman escapes at the middle of the fight, leaving Half-Life to battle Hulk alone. After beating Half-Life, the Hulk finally confronts the Leader. The Leader uses the orb to cure the Hulk. Bruce was finally free of his mutation, but in order to save humanity from the Leader's Gamma army, he touches the Orb to become the Hulk once more. He unleashes the Hulk, who beats the Leader despite his powerful psychic attacks and destroys the Gamma Orb. As New Freehold begins to collapse, the Leader escapes by teleporting himself. The Hulk manages to reach the teleport chamber, but he encounters one final fight with Madman. After defeating Madman, the Hulk teleports himself and escapes. The game ends showing Dr. Crawford trying (and failing) to create another Gamma Orb, General Ryker experimenting on Flux, and Bruce Banner walking alongside a highway attempting to hitch a ride home. Banner's shadow was that of the Hulk.

Retrieved from "https://marvel.fandom.com/wiki/Hulk_(video_game)?oldid=5762291"
Community content is available under CC-BY-SA unless otherwise noted.