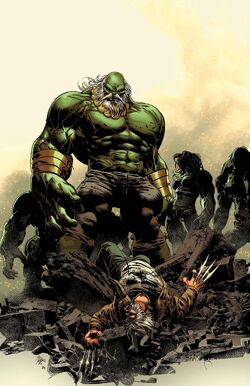 Base of Operations
Hulkland
Affiliations

Enemies
Logan, anyone who doesn't pay their rent
Origin

The Hulk Gang shared a similar history to their original Wastelands counterpart's.

Following the Hulk's death, all the Hulk Gang members who had deserted at some point and Billy-Bob were gathered by the Maestro, an alternate universe version of their Hulk who promised to help them build a paradise for Hulks in another universe.[1]

Retrieved from "https://marvel.fandom.com/wiki/Hulk_Gang_(Earth-21923)?oldid=5564530"
Community content is available under CC-BY-SA unless otherwise noted.