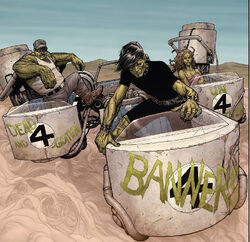 The Hulk Gang is a gang of hillbilly Hulks who are the result of Hulk impregnating his first cousin She-Hulk. Most of the Hulk Gang members are grandchildren of Bruce Banner who have become run-of-the-mill thugs, beating or killing people when they don't pay their rent on time.

When the Hulk Gang found out Logan didn't have the money to pay for the rent of his farm, its members Bobbie-Jo, Charlie, and Otis Banner paid a visit to him and punished him for missing payment. Shortly before leaving, they said he had to pay double the next month; otherwise, they would kill him and his family.[1] However, while Logan was away delivering a package with Hawkeye to get the money he owed to them, the Hulk Gang got bored and murdered his family.

Once Logan returned home and learned about what had happened in his absence from his neighbor Abraham Donovan,[2] he went after the Hulk Gang and killed all the members he encountered like Bobbie-Jo, Charlie, Otis, Rufus, Woody, Beau, Elrod, Eustace, and Luke Banner. This led up to a showdown with Hulk which ended with Logan as the victor. The only members of the Hulk Gang who remained were Billy-Bob Banner, who was spared by Logan, and the Hulk's infant son Bruce Banner Jr., who Logan took into his custody.[3]

Like this? Let us know!
Retrieved from "https://marvel.fandom.com/wiki/Hulk_Gang_(Earth-807128)?oldid=5629180"
Community content is available under CC-BY-SA unless otherwise noted.