View source
watch 01:25
Jurassic World: Dominion Dominates Fandom Wikis - The Loop
Do you like this video?
Play Sound
Part of the Smashtronaut arc

If you can hear this message, then I am already gone. I am broadcasting this not to explain myself... but as a warning. I'm leaving. Not because I hate you. Not because I'm scared of you. I'm leaving because none of you will know how to deal with what I'm going to become. You all have your little plans. Your armored suits, your rocket ships-- All of your clever ideas on how to deal with my monster should his actions not prove to be in your best interests. But... you aren't dealing with him anymore. You are dealing with me. And I promise... you have no plan... for me. Because I am not controlled by my rage anymore. I am fueled by it.

Appearing in "Smashtronaut – Part One"

Synopsis for "Smashtronaut – Part One"

The uncontrollable rage of the Hulk has reached an all-new level, and nobody – including the Avengers – is prepared to handle it. But is it really the Hulk that people should be afraid of, or is there something missing to this puzzle? Join the superstar creative team of Donny Cates and Ryan Ottley as they look to the stars for the next era of HULK! 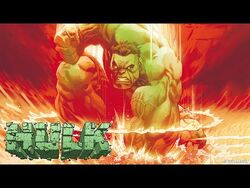