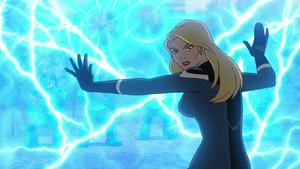 Appearing in "Monsters No More"

Synopsis for "Monsters No More"

The world finally accepts the Agents of S.M.A.S.H. as heroes. Before the Agents of S.M.A.S.H. can enjoy their success, a surprise attack from Leader and his Agents of C.R.A.S.H. threaten to destroy Vista Verde and the Hulk's reputation.Assembled by the Leader as part of his master plan to destroy the Agents of S.M.A.S.H. He puts together a team made up of their deadliest foes including the Abomination, Absorbing Man, Titania, Blastaar and Sauron. He provided each member with stealth belt designed so that only Gamma powered beings like the Hulks could see them. He also made used Adamantium so that they are not destroyed during the confrontation. He waited to deploy them until the Agents of S.M.A.S.H. have achieved their goal for the world to see them as heroes so that their defeat would be more significant. That day come after the Agents of S.M.A.S.H. teamed up with the Fantastic Four to stop the Toad Men. While the rest of the team was away, Hulk conversed with the Leader in his cell; however he made Hulk believe he escaped by showing himself as a hologram. Hulk smashed his cell wall and the Leader told him that he planted five Gamma Bomb's in Vista Verde, which would blow up in thirteen minutes. When the Hulk left, the Leader was revealed to be still in his cell and escaped by his destroyed cell wall. Hulk then called out his for his and informed them of the situation. Arriving at Vista Verde, Hulk scared the people near and told his team to search for the bombs. They were attacked by C.R.A.S.H. and both teams collided. The fight created a lot of collateral damage, and since C.R.A.S.H. used their belts, the people only saw the Hulks destroying the city. The Agents of S.M.A.S.H. ultimately defeated their foes at the cost of Vista Verde ending in ruins. Hulk found a transmitter in his statue were the Leader revealed that they were the five Gamma bombs that destroyed Vista Verde, having being tricked by the Leader. When the military arrived the Agents of S.M.A.S.H. tried to show them the unconscious C.R.A.S.H. members but they couldn't see them, forcing them to flee with the world blaming them for destroying the only city that ever loved them. When the leader tries to escape throw a portal the Agents of S.M.A.S.H. follow and they wind up on a mysterious world, which Skaar reveals to be his home.

Like this? Let us know!
Retrieved from "https://marvel.fandom.com/wiki/Hulk_and_the_Agents_of_S.M.A.S.H._Season_1_24?oldid=6497323"
Community content is available under CC-BY-SA unless otherwise noted.