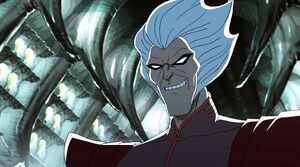 Magnificent, isn't it? Every major hero, including many rare and unique ones, most in mint condition!

Appearing in "The Collector"

Synopsis for "The Collector"

Hulk and the Agents of S.M.A.S.H. still in New York attend a card game at the Baxter Building held by the Thing. The Hulk also invites Spider-Man to help improve his image as well on Rick's web show, due to J Jonah Jameson considering him a menace. The Collector arrives on Earth where he starts collecting Earth's heroes consisting of the Avengers, the Fantastic Four, Howard the Duck, Wolverine, and the Agents of S.M.A.S.H. This continued until Hulk and Spider-Man are left. They trace the probes responsible for the abductions to an orbiting spaceship where they find the superheroes in stasis bubbles. Collector arrives and introduces himself to them where he states that he has been researching Earth's heroes where he deemed Spider-Man and Hulk unworthy to be in his collection due to them being menaces. Collector ejects them into the garbage chute where they managed to escape. As Collector goes into phase two of his plans, Hulk frees his team to help fight Collector. Collector then sends his probes to catch the escaped heroes so that Collector can work on his plan to "make his collection priceless." The Agents of S.M.A.S.H. figures out that Collector plans to "make his collection priceless" by blowing up the Earth. Red Hulk and A-Bomb work to disarm Collector's bomb while Hulk and Spider-Man confront Collector who still considers Hulk and Spider-Man unworthy. Collector grows in size where he grabs Hulk and Spider-Man in his hands. Hulk talks about Spider-Man's "true hero self" as Collector drops Hulk. Collector is surprised that Spider-Man is a teenager which Peter Parker's face was pixelated as Hulk knocks Spider-Man out of Collector's hands. After She-Hulk and Skaar teleport the other heroes off the ship, Collector is still on his ship as his ship explodes from the bomb which Red Hulk and A-Bomb failed to disarm and unknowingly trapped. Collector manages to get off the ship before it explodes as he gives a holographic message to the Agents of S.M.A.S.H. that he will return one day and collect them first before he collects the rest of Earth's heroes.

Retrieved from "https://marvel.fandom.com/wiki/Hulk_and_the_Agents_of_S.M.A.S.H._Season_1_4?oldid=5722014"
Community content is available under CC-BY-SA unless otherwise noted.