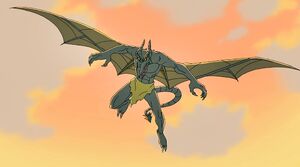 When the Agents of S.M.A.S.H. arrive in the Savage Land, Sauron leads an army of laser-mounted Pteranodons in an attack upon their jump jet. During the fight, Sauron drains the energy from one of the Pteranodons where he manages to knock A-Bomb off the jump jet. Saruon states that he and his dinosaurs survived extinction and that man's time on Earth will be at its end. While Sauron controls Devil Dinosaur into attacking A-Bomb and Red Hulk, She-Hulk and Skaar find Sauron's lizardmen allies using a special drill in the super volcano. Sauron is alerted about the situation at the super volcano and commands Devil Dinosaur into finishing the job. pon being freed from Sauron's mind-control, Devil Dinosaur regurgitated A-Bomb as Devil Dinosaur becomes friends with A-Bomb. Devil Dinosaur helps to fight Sauron's forces and destroy the drill. Sauron engages Skaar in battle as he tries to mind control him, and drains the energies of him and She-Hulk. Hulk, Red Hulk, A-Bomb, and Devil Dinosaur arrive; Hulk fights Sauron while the others work to stop the drill. Sauron then tries to drain Hulk's energy which doesn't work. After the drill was destroyed, a weakened Sauron flees from the Pteranodons. Devil Dinosaur is brought back with the Agents of S.M.A.S.H. as their "pet."

Retrieved from "https://marvel.fandom.com/wiki/Hulk_and_the_Agents_of_S.M.A.S.H._Season_1_6?oldid=5480514"
Community content is available under CC-BY-SA unless otherwise noted.