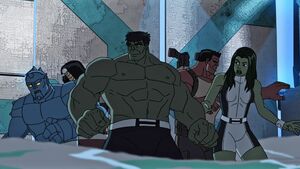 Welcome to the Green Room!

Appearing in "The Green Room"

Synopsis for "The Green Room"

Upon S.H.I.E.L.D. exonerating them from the frame-up in Vista Verde caused by the Agents of C.R.A.S.H., the Agents of S.M.A.S.H. track the Leader to his hideout on the Isle of Lucee. They get stuck in a deadly maze (which Leader improved on Thunderbolt Ross' plans in his earlier fight with Hulk) where Hulk's rage is drained from him, making him mellowed out. After the rest of his teammates are captured, Hulk finds them in Leader's clutches at the center of the maze where Leader uses his machine to manifest Hulk's dark side in the physical form of Dark Hulk.

Like this? Let us know!
Retrieved from "https://marvel.fandom.com/wiki/Hulk_and_the_Agents_of_S.M.A.S.H._Season_2_13?oldid=6497338"
Community content is available under CC-BY-SA unless otherwise noted.