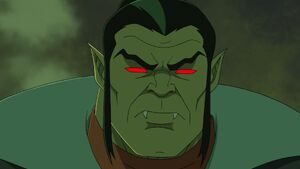 Hulk follows Leader back in time to the Victorian era and unites the Howling Commandos against Dracula who wants to shroud the Earth with Leader's gamma cloud allowing vampires to prey night and day. In the present, the Agents of S.M.A.S.H. deal with a Vampire Hulk.

Like this? Let us know!
Retrieved from "https://marvel.fandom.com/wiki/Hulk_and_the_Agents_of_S.M.A.S.H._Season_2_21?oldid=6497347"
Community content is available under CC-BY-SA unless otherwise noted.