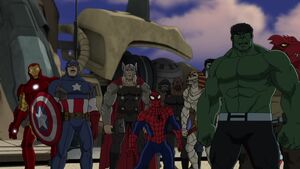 Wait, Hulk on one, two teams!?

Hulk is torn between his two teams - the Agents of S.M.A.S.H. and the Avengers - as both team up to save Earth from a Kree armada led by the Supreme Intelligence.

Retrieved from "https://marvel.fandom.com/wiki/Hulk_and_the_Agents_of_S.M.A.S.H._Season_2_25?oldid=6402466"
Community content is available under CC-BY-SA unless otherwise noted.