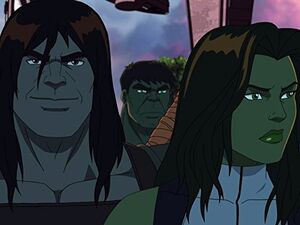 Hulk and the Agents of S.M.A.S.H. Season 2 Episode 5
Release Date
November 9, 2014
Directors
Patrick Archibald
Writers
Paul Dini
Previous and Next Episodes
Previous
Next
"Guardians of the Galaxy"
(November 2, 2014)
"A Druff is Enough"
(November 17, 2014)

After Leader tricks Skaar into entering a temporal displacement wormhole to Earth, the Hulks return to Earth a thousand years in the future only to discover that the High Evolutionary has turned all humans into Animal Men. The Earth got that way when a gamma meteor struck Earth a few months after the Hulks had left it. The High Evolutionary evolves Hulk to serve him and devolves A-Bomb, Red Hulk, and She-Hulk too. Skaar is unaffected and steps up to save the team and all of mankind.

Like this? Let us know!
Retrieved from "https://marvel.fandom.com/wiki/Hulk_and_the_Agents_of_S.M.A.S.H._Season_2_5?oldid=6497355"
Community content is available under CC-BY-SA unless otherwise noted.