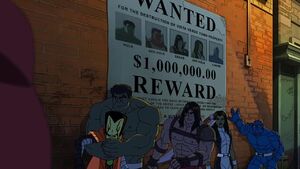 Hulk and the Agents of S.M.A.S.H. Season 2 Episode 7
Release Date
January 18, 2015
Directors
Patrick Archibald
Writers
Marty Isenberg
Previous and Next Episodes
Previous
Next
"A Druff is Enough"
(November 17, 2014)
"Spidey, I Blew Up the Dinosaur"
(January 25, 2015)

The Agents of S.M.A.S.H. returns to Earth with Leader still in their possession even though they were blamed for the destruction of Vista Verde following the incident by Leader's Agents of C.R.A.S.H. They find Vista Verde under the rule of Abomination (who was pardoned and reinstated into the U.S. Army) upon learning this from Mayor Stan and finding Hulkbusters that are under his command. Now the Agents of S.M.A.S.H. must liberate Vista Verde and defeat Abomination before he can use one of Thunderbolt Ross' old weapons in his plan to attack other nations.

Like this? Let us know!
Retrieved from "https://marvel.fandom.com/wiki/Hulk_and_the_Agents_of_S.M.A.S.H._Season_2_7?oldid=6497357"
Community content is available under CC-BY-SA unless otherwise noted.