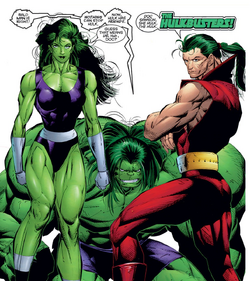 The Hulkbusters are a group of gamma-irradiated mutates that had banned together as a group of heroes. Their ranks included Bruce Banner who became the gamma spawned Hulk after the terrorist organization Hydra exploded his own gamma bomb with himself trapped inside; Leonard Samson who was forcibly injected with gamma radiation by government agent Jasper Sitwell into an abomination, however a blood transfusion from the Hulk stabilized his mutation; Lastly, Jennifer Walters who impulsively gave herself a blood transfusion and become the She-Hulk.[citation needed]

Shortly after their formation, they helped the Avengers battle the heralds of Galactus following the death of the Fantastic Four. She-Hulk joined Thor in battling Terrax in Attilan, killing the Herald. Doc Samson joined Namor, Captain America, and Hawkeye in battling Firelord on Monster Island. Lastly, Bruce Banner aided Dr. Doom, Iron Man, and Ant-Man in attempting to build a device to stop Galactus. This failed and, they all perished. However, Dr. Doom traveled back in time to change history and prevent Galactus from succeeding in his mission. This time around, the Hulkbusters saved the Fantastic Four from death, and Banner worked with the reunited Knights of the Atomic Roundtable in building an Ultimate Nullifier to ultimately stop Galactus.[1][2]

The Hulkbusters broke up shortly thereafter, with the Hulk resuming his usual rampaging nature. He and She-Hulk were among the mass exodus of heroes from Counter-Earth to Earth-616 to save both Earths from destruction at the hands of the Celestials, and they were merged with their Earth-616 counterparts.[citation needed] The fate of Doc Samson remains unrevealed.

Retrieved from "https://marvel.fandom.com/wiki/Hulkbusters_(Heroes_Reborn)_(Earth-616)?oldid=5547910"
Community content is available under CC-BY-SA unless otherwise noted.