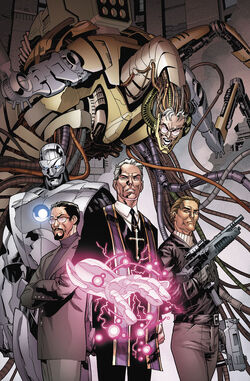 Following the birth of the first mutant born since M-Day, Matthew Risman and the Purifiers, with the aid of Eli Bard, managed to find Bastion in a S.H.I.E.L.D. facility. After "resurrecting" Bastion, they then harvested the remains of Magus, modified it into a techno-organic virus (or T.O. virus) and injected his remains into several living and dead known mutant killers (Donald Pierce, the Leper Queen, Reverend William Stryker, Stephen Lang, Cameron Hodge, Graydon Creed, and Bolivar Trask), turning them all into Technarch/human hybrids and "resurrecting" the dead members, much to Risman's objections. These mutant killers now constitute an inner circle of leadership for the Purifiers: The Human Council.[2]

Individual members of The Human Council were charged with different duties to give the appearance of several different organizations being run independently while all secretly being directed by Bastion.[3] These missions occasionally overlap and are assigned as follows:

Not long after the Human Council's formation, Eli Bard left to bring the T.O. Virus to Selene the Black Queen which lead to the events of Necrosha. He became a member of Selene's Inner Circle until his death.[20] The mysteriously mutant resurrections across the world led Bastion to realizes that someone had gotten hold of the T.O. virus. This spurs him onto accelerating his mysterious plan.[21]

With the return of Cable and Hope, the Mutant Messiah, Bastion final plans for the extinction of mutantkind have begun.[8] Bastion began tracking the pair to using Cable's T.O. virus as a beacon. Hodge's Smiley-Faces and Stryker's Purifiers have both been used to attempt to kill Hope.[6][7][9] Once the X-Men understood how Bastion was tracking Cable they broke into two team: Nightcrawler, Rogue and Hope teleporting back to Utopia and Wolverine, Cable and the remainder of Alpha Team to act as decoys.[9] Bastion quickly uncovered the deception and attempted to kill Hope personally, but he is confronted by Rogue and then damaged when Nightcrawler sacrifices himself to save Hope.

After Hope arrived on Utopia, Bastion launched the next phase of his plan. During the months leading up to Hope's return a large energy dome was built over the Bay Area to cut off the X-Men from escape or help. Once the dome was activated, Bastion opened a dimensional portal from his home reality to allow in more Nimrod-Series Sentinels.[22] Like the original Nimrod, these Sentinels are able to detect, analyze and adapted to mutant powers. They are also self-repairing. The X-Men were barely able to subdue them, and several X-Men sustained severe injuries.[23] Every five minutes a wave of five new Nimrod Sentinels continued to appear through the portal.[24] Only by sending X-Force, Cable and Cypher into the future to reprogram and destroy the Nimrod Master Molds were the X-Men successful to defeating them.[23][25][14]

Once the dimensional portal was closed, Bastion decided it was time to confront Hope personally. He converted both Lang and Creed into robot forms to battle the X-Men on the Golden Gate Bridge. However, Hope's mutant powers manifested which allowed her to destroy all three in battle.[14]

Like this? Let us know!
Retrieved from "https://marvel.fandom.com/wiki/Human_Council_(Earth-616)?oldid=6488082"
Community content is available under CC-BY-SA unless otherwise noted.