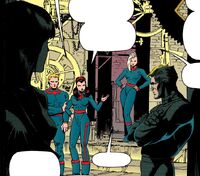 The fittest that this soon to be forgotten race of genetically deficient beings has to offer.

Following the takeover of America by Apocalypse, the majority of the human population was displaced to Europe. Some of humanity's most prominent people were appointed to the newly formed Human High Council, the ruling body of the surviving human population.

They employed many operatives, who operated in different capacities. Military commander Thaddeus Ross held command over soldiers such as Carol Danvers, Clint Barton, Sue Storm, and Ben Grimm. Donald Blake and his aid Gwen Stacy were part of the relief effort in famine-ravaged Africa. Victor von Doom was the head of Eurasian security, while Tony Stark and Bruce Banner provided their technological expertise. The latter, unknown to all, was also a double agent for Apocalypse. They also hired mutant mercenaries Weapon X (Logan) and Jean Grey.

The two mutants collected information from Sinister regarding Apocalypse's sea wall defense perimeter. They turned this information over to the Human High Council.[2] With this information, the Council mobilized a Sentinel evacuation of the remaining human population in North America.[3]

Also an attack on the council by agents of Apocalypse led the Council to go ahead with a plan to launch a nuclear assault on Apocalypse's kingdom. When the Reavers attempted to thwart this, Braddock's double-cross was revealed and he was slain. Weapon X succeeded in recruiting Gateway to teleport the nuclear weapons over America.[4]

The High Council next had to deal with the "Lost Horseman", Mikhail who offered salvation through cybernetic augmentation. However this was a double cross. However, Victor von Doom, Donald Blake, Tony Stark, Gwen Stacy, Susan Storm, and Ben Grimm exposed this plot. Banner was revealed as a double agent and defected back to the side of humanity after he learned Apocalypse had launched his sea wall defenses. During the battle against Mikhail, Donald Blake and Victor von Doom prevented an assassination attempt on the council, and Blake sacrificed his life killing Mikhail.[5]

Although the sea wall defenses were stopped by Jean Grey,[6] the fate of most surviving Council members is unknown. Mariko Yoshida returned to Japan.[7]

Retrieved from "https://marvel.fandom.com/wiki/Human_High_Council_(Earth-295)?oldid=5547917"
Community content is available under CC-BY-SA unless otherwise noted.