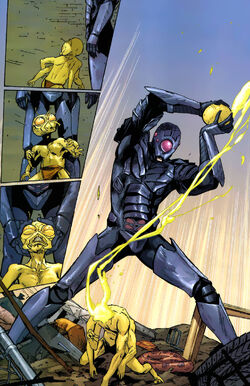 Humbug Suit: enhanced his suit to a full exosuit. He has so far demonstrated superhuman strength, speed, agility, senses, and the ability to communicate with any insectoid in the world and possibly beyond Earth. The helmet is similar to Ant-Man's Helmet; Mitty's weapons were amplified sounds of particular insects. He carried a collection of cassette tapes which held each sound and, when properly amplified through devices in his gloves, demonstrated various effects, including:

Like this? Let us know!
Retrieved from "https://marvel.fandom.com/wiki/Humbug%27s_Suit?oldid=6436375"
Community content is available under CC-BY-SA unless otherwise noted.