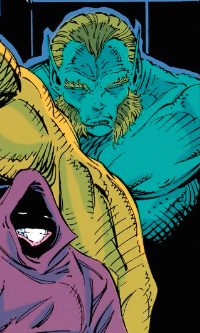 Hump and his brother Brute were both Morlocks and fought alongside Masque. When Brute threatened Cable, he was shot and Hump and Masque left. Later when Masque helped the Brotherhood along with Thornn against X-Force, it is unknown why Hump did not join them.

He has not been seen since then and it is unknown if he left the Morlocks or, if he stayed, survived Mikhail Rasputin's flooding of the Morlock tunnels. If he is still alive, whether swept away or not, it is unknown if kept his mutant powers or not after M-Day.

He reappeared with his brother and the morlocks to defend Lowtown in Madripoor from the attacking Reavers.[1]

Like this? Let us know!
Retrieved from "https://marvel.fandom.com/wiki/Hump_(Earth-616)?oldid=6445239"
Community content is available under CC-BY-SA unless otherwise noted.