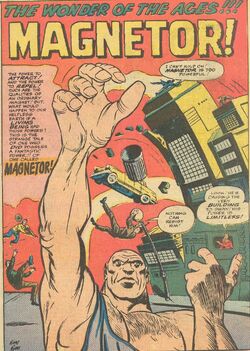 Hunk Larken was always considered an outsider due to his large size and great strength. He tried to become a professional athlete but proved too slow and clumsy for the games of basketball, baseball and boxing. Hungry and alone, Hunk took a job in a travelling carnival as a sideshow attraction called the Modern Monstrosity. He was fired from the carnival when he attacked a spectator who made derogatory comments about him. Once again down on his luck, Hunk applied to be a test subject for a mission to Outer Space. Accepted because of his strength and low nervous response, Hunk was sent out into space in an early form of spacecraft. Upon reaching outer space, the ship passed through a cloud of unknown radioactive anti-matter which penetrated the ship's hull and nearly killed Larken. Hunk, however, had managed to bring the spacecraft back to Earth in the nick of time and, upon inspection, it was found that he had gained unusual powers from his exposure to the anti-matter. By lifting his left arm, Hunk could attract all objects and people towards him and could repel them just as quickly by raising his right arm.

Hunk immediately realized that with his newfound powers, he could strike back at a world that had mocked and ridiculed him for his entire life. Dubbed Magnetor by the public, Larken went on a rampage, first destroying the carnival where he had worked, then robbing a back and finally by pulling down an entire building. He even repelled incoming jet fighters that were trying to destroy him. A short time later, however, Larken realized that his powers were wearing off and were not inexhaustible as he had first believed. Hunted as a fugitive, Larken hid for days until he sneaked back to the space research facility and boarded another spacecraft. After the automated ship had left Earth's atmosphere, a voice came through the speakers informing Larken that they knew who he was and why he had gone on such a rampage. They told him that they had built this ship especially for him and that contained years worth of food. They told him that they wished him to find the happiness that had always been denied him on Earth. With a tear in his eye, a thankful Larken piloted the ship into the great unknown. His current whereabouts and subsequent history are unknown.

By raising his left arm, Larken could attract anything towards him, including people, money, cars, etc. Similarly, he could repel any form of matter with his right arm.

Even before the accident which gave him his powers, Larken still possessed peak human strength.

Larken's powers appeared to weaken shortly after he gained them. It is unknown if this is because of over-use or if the effects of the space-cloud which granted him his powers was just temporary.

Like this? Let us know!
Retrieved from "https://marvel.fandom.com/wiki/Hunk_Larken_(Earth-616)?oldid=5059293"
Community content is available under CC-BY-SA unless otherwise noted.