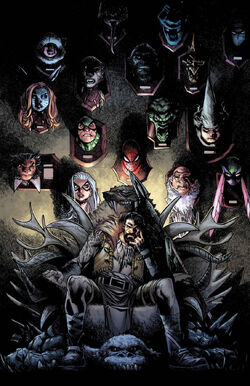 Kraven the Hunter is back on the attack: after having forced the High Evolutionary, to clone him in order to have a worthy heir, he is ready to eliminate all those who according to him act dishonorably, poachers and all criminals who have animal-inspired powers. Kraven traps them in Central Park and after surrounding the park with a force field, forces them to kill each other. Obviously Spider-Man is the most coveted prey, and to lure him into a trap the hunter uses exceptional baits: Felicia Hardy and Billy Connors.

There is only one way to break the force field and stop the massacre: kill Kraven, but the spider decides not to do it and talking to the hunter makes him understand the value of mercy, so Kraven frees the prisoners and pretending to be Spider-Man pushes his clone to kill him, thus returning to eternal peace.[1]

Retrieved from "https://marvel.fandom.com/wiki/Hunted_(Spider-Man_Story_Arc)?oldid=6338777"
Community content is available under CC-BY-SA unless otherwise noted.