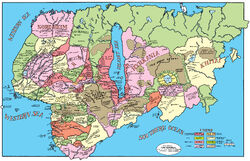 Prelude to the Hyborian Age

Over time the Hybori moved southward and established other kingdoms. By 13,000 BC the Hybori had conquered Acheron. Within another five hundred years, the Hyborian kingdoms dominated the western part of the super continent. Toward the north, the savage Picts and the descendants of the Atlanteans, the barbarian Cimmerians dominated. Five hundred years later, Aquilonia was the mightiest kingdom in Hyboria. The north was dominated by the barbaric Aesir and Vanir. In the steppe, the Hyrkanians (descendants of the Lemurians) migrated westward and established the mighty empire of Turan, along the Vilayet Sea. On the eastern side of the super continent was the empire of Khitai, the largest dominion of them all. The masters of the vast steppe between Khitai and Turan were the Hyrkanians, nomadic horse archers.

At the twilight of the era, the Aquilonians overextended their empire. Cimmerians and Picts overwhelmed its frontiers, and the disgruntled soldiers of annexed peoples revolted. Fire and sword brought down the empire. It's former rivals and territories were conquered by northern invaders (Vanir, Aesir, and Cimmerians) and the hordes of the Hyrkanians. Turan and Hyrkania later collapsed, and the Vanir took over Stygia. Fifteen hundred years later, in 9500 BC, another cataclysm toppled the existing civilizations and formed the current Earth.[9]

The Hyborian Age dominated Earth from 14,000 to 9500 BC.[9] It is sometimes simply eight thousands years after the Great Cataclysm,[10] or three thousand years after the Fall of Acheron,[11] circa 10,000, during the Age of Conan.

Other sources mentions the Hyborian Age as ending in approximately 8000 BC.[21]

A mutant civilization carbon-dated to be 15,000 years old existed in modern-day Isla des Demonas[22]. That civilization, built by the demon-looking mutants known as Neyaphem and led by Azazel who called himself Satan, enslaved humanity. That civilization eventually ended when the Neyaphem were repelled to another dimension by the "Angels", the Cheyarafim, another early group of mutants.[23]

13.000 years ago,[24][25] Randac was King of the Inhumans.[26] Randac found the Terrigen Mists. Subjecting himself to immersion in the Terrigen Mist and gained godlike powers.[27] through the activation of the latent mutant genes carried by all Inhumans.[28] A Kree Sentry examined Randac, and judged that the Kree's goals were reached.[29] The Terrigenesis concept provoked a schism in the Inhumans[27][30] Many groups of Inhumans departed Attilan at various dates (names and dates are known to Attilan's Inhumans, but without much consideration from them),[31] many Inhuman tribes left Attilan to create their own cities, or blend among humans.[27] A few of those "Lost Tribes" even departed to space. Fewer of those tribes returned to Earth later.[32]

The neolithic revolution, and the and domestication of animals by humans, was stated to date back to 9000 BC.[22]

Norway was believed to have been settled more than 10,000 years ago, as the last Ice Age came to an end.[33]

After the Hyborian Age

For the full presentation of this event, please consult the Post-Hyborian Cataclysm page.

The Olympian gods sought worshipers. While Neptune became the patron god of the Atlanteans (Homo mermanus), Zeus lay Mount Olympus near the Eternals' city of Olympia, thereby deciding that the Olympians would be worshiped by the people of the land now known as Greece.[34]