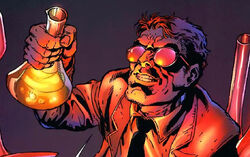 The Hyde formula is a hormonal treatment created by biochemist, Calvin Zabo. The formula drastically enhances the human body, adding several hundred pounds of muscle and bone. The transformation usually completes within 30 seconds of ingestion. The skin does not apparently develop in exact proportion to the rest of the body so the face has a perpetual grimace and the fingerprints are altered. Zabo has continued to experiment with his formula increasing its potency as well as prolong its effects. [2]

It has been shown to endow the user with the following attributes:

One drawback to its use is inducing violent rages, impairing proper judgement.

An unforeseen side effect of the formula on Zabo's illegitimate daughter Daisy Johnson alias Quake, it activated her Inhuman lineage without the need for the Terrigen Mist. Daisy was born with the power to generate and control seismic waves.[3]

Jack Flag attempted to infiltrate the Serpent Society, but King Cobra did not fully trust Flag. King Cobra sent him to steal a painting from Mr. Hyde, who severely beat Jack. While fighting, Flag was drenched in Hyde's chemicals and developed superhuman strength. After receiving his new powers, Flag easily defeated Mr. Hyde and retrieved the painting that he was supposed to steal for the Serpent Society.[4]

"Tell me you figured out what drugs Cal took, because my gut's saying everything ever made." "I haven't fully sequenced the formula yet, if only for the multitude of trace drugs found, but my initial list includes anabolic-androgenic steroids, a liver enzyme blocker, various metabolic enhancers, methamphetamines, what appears to be gorilla testosterone, and, no lie, a drop of peppermint. I think it's an ill-conceived attempt at super strength." Phil Coulson and Jemma Simmons

Cal Zabo created a chemical compound that gave its user super-strength. Cal admitted his use of the liquid to the Slicing Talons.[5] The formula was in Cal's office, when he retrieved the equipment he used to piece together Jiaying, and showed the kit to Daisy.[6] Cal was handed over to S.H.I.E.L.D. in an effort to come to a truce between S.H.I.E.L.D. and the Inhumans. A nearly-empty vial of the formula was retrieved from his jacket, and he denied knowledge of it.[7]

Retrieved from "https://marvel.fandom.com/wiki/Hyde_Formula?oldid=6039287"
Community content is available under CC-BY-SA unless otherwise noted.