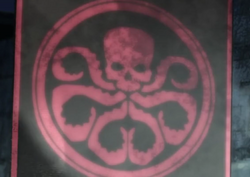 You can never defeat Hydra. We will always rise again.

Hydra is a renegade military organization led by the Red Skull who is obsessed with harnessing magical artifacts in his bid to take over the world. Additionally, Hydra is the advanced science branch for the Third Reich, in Germany during World War II.

At some point during the war, Hydra invaded Transylvania, which led to Dracula allying himself with Captain America.[1]

In 1944, the time traveling Leader allied himself with Hydra and used his knowledge about the Gamma radiation to transform the Red Skull into the Hulk-sized Green Skull. The Green Skull then manages to overwhelm Captain America and the time traveling Hulk. This creates an alternate future where Hydra, led by the Leader, rules the world. However, that reality was erased from existence when Captain America managed to free Hulk who turned the Gamma Siphoner onto Green Skull regressing him back to Red Skull. Hulk then defeats Red Skull and Leader escapes into another year.[2]

After the war Hydra become a terrorist group and long-time enemy of the task force S.H.I.E.L.D..[3]

Retrieved from "https://marvel.fandom.com/wiki/Hydra_(Earth-12041)?oldid=5321645"
Community content is available under CC-BY-SA unless otherwise noted.