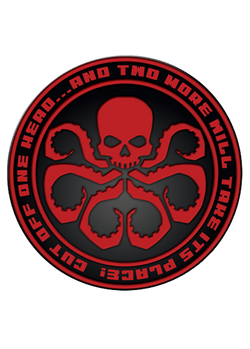 A terrorist group founded by the Red Skull during World War II as a Nazi elite weapons program. After the death of the Skull and the fall of the Nazi regime, Red Skull's right hand Baron Zemo escaped to Japan, where he reorganized Hydra as a secret society bent on world domination.[1]

One day, a mysterious pulse hit Earth, a phenomenon which affected technology worldwide, left strange energy signatures, and traces of an unknown material. Hydra was one of the first organizations to try to get their hands on the mysterious element which enhanced its user's abilities, and were opposed by S.H.I.E.L.D. (and its Alliance of superheroes) numerous times.

After the Red Skull was resurrected using magic of the Hand, a fight for the right to be Skull's right hand started between Baron Zemo, Viper, Baron Strucker, and Arnim Zola.[1]

So Shall Ye Reap

Wonder Man told S.H.I.E.L.D. that HYDRA is closing in on his position. They want to get Isotope-8 from his lab. He fought against Sandman, Jack O-Lantern and Arnim Zola. But Arnim Zola make the building to collapse, making an explosion, causing Wonder Man to be injured. Wonder Man was transported into a hospital near Bellevue. But Baron Strucker attacked the area, but Tigra defeated him. Wonder Man is now fully recovered. But the Avengers Tower is fully assaulted by HYDRA lead by Baron Zemo, Viper and Grim Reaper, but they were all defeated.[citation needed]

Retrieved from "https://marvel.fandom.com/wiki/Hydra_(Earth-12131)?oldid=5016835"
Community content is available under CC-BY-SA unless otherwise noted.