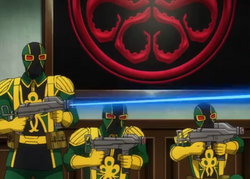 The history of this incarnation of HYDRA most likely mirrors that of their Earth-616 counterpart. Led by Red Skull, Hydra is known as one of the greatest terrorist organizations in the world.

On Red Skull’s orders, Hydra abducted scientist Bridget Chan because they needed her research on the Gaia Lines for Red Skull’s plan to destroy the Earth. To rescue her, Falcon and Hawkeye infiltrated the Hydra base where she was held captive, but discovered Hydra had been warned about their arrival by a mole inside S.H.I.E.L.D.. The two heroes still managed to rescue professor Chan, but Hawkeye seemingly perished in the fight with Hydra soldiers and Crossbones.

Hydra soldiers were also present at four of the five bases from which Red Skull planned to destroy the Earth, helping the various Masters of Evil members to guard them against the Avengers. They failed in this mission and all bases were destroyed. Hydra's main base is also destroyed when first Red Skull forces the Avengers to fight each other by holding Hikaru hostage, and later when Red Skull activates his ultimate weapon; a giant robot. After the Avengers and other heroes defeat this robot and capture Red Skull, all Hydra soldiers are arrested by S.H.I.E.L.D., putting an end to the activities of Hydra.

Retrieved from "https://marvel.fandom.com/wiki/Hydra_(Earth-14042)?oldid=5547942"
Community content is available under CC-BY-SA unless otherwise noted.