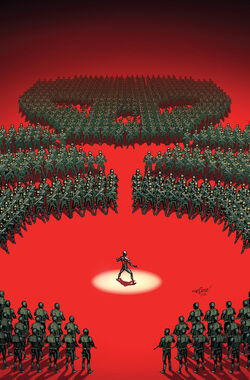 Hydra is a terrorist organization, lead by Viper.

One time, before the Ultimatum Wave, they tried to steal Iron Man's Armor from Stark Industries offices in Manhattan. They were stopped by the combined efforts of Stark as Iron Man and Spider-Man.

During the Nimrod invasion, Hydra managed to reinforce and made an alliance with Modi in an attempt to topple the United States government. [1] In the final battle for Wyoming, Hydra's forces were ultimately defeated by the Ultimates and S.H.I.E.L.D.. Many Hydra members remain active underground.

Retrieved from "https://marvel.fandom.com/wiki/Hydra_(Earth-1610)?oldid=5547946"
Community content is available under CC-BY-SA unless otherwise noted.