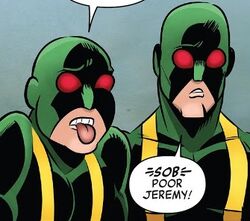 We are Hydra! Cut off one, head, two more will spring up!

Hydra seemingly had a similar history as its Earth-616 counterpart. They had an alternation with Wolverine where she misinterpreted their battlecry as being literal, beheading one of their agents thinking he'd grow two heads in its place. The next week, they attempted to blow up New York City, only to be stopped by Ms. Marvel.[1]

Retrieved from "https://marvel.fandom.com/wiki/Hydra_(Earth-36701)?oldid=4793887"
Community content is available under CC-BY-SA unless otherwise noted.