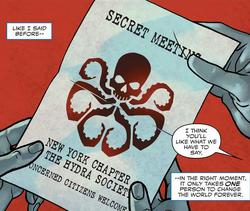 The Brotherhood of the Spear, later known as Hydra, was an eastern secret society which had existed since the dawn of the man, surviving through several dynasties and empires by persevering the survival of the strongest.[7]

Its name came from Imhotep's Spear, acquired by the Brotherhood after Imhotep's battle against the Brood in 2620 B.C.[8]

In 114 A.D., during the Han Dynasty, Zhang Heng was the keeper of the Spear. He met with the pregnant Celestial "Madonna" and avoided the consumption of Earth or the Moon for nourishment of the infant Celestial by suggesting the use of the Sun as gestation place.[8][2]

At some point scientist Isaac Newton became the Grandmaster of the Brotherhood, and birthed Hydra from the Spear using the hidden arts of the Deviants of the city of Ashomia,[1] which would become the source and the birthplace of Hydra,[7][1] and the visions of Nostradamus, who would be known as the Catalyst, while Newton became the Father.[1]

In that period, Hydra was focused on ancient threats coming's return, and the ways to defeat them.[5]

At some point, Newton made of Daniel Whitehall the Kraken,[1] who was sworn to protect Ashomia.[7]

Dr. Sebastian Fenhoff taught Hydra's pupils about the story of Zhang Heng and his servant confronting the Celestial Madonna.[2]

Hydra leaders Baron Zemo, Elisa Sinclair, Dr. Sebastian Fenhoff and Kraken soon discussed their involvement with Nazi Germany and the Axis, seeing the Führer, Adolf Hitler, as the one they were waiting for.

The plan was to infiltrate among the ranks of the Axis and install their own lieutenants, influencing the formal partnership with the Third Reich. Elisa Sinclair's connection within the Thule Society were crucial for this plan. Hydra wished to benefit of the relics of the dark arts and the Lost Gods that Hitler was assembling.

Zemo himself was offered by them a high-ranking position within Nazi Germany science division, allowing him to see their plans of powerful weapons and Super-Soldiers he thought could be the things needed to confront the ancient threats.

Elisa Sinclair was unsure of this alliance, having used her sight to foresee the suffering of what would be, and stating that Hydra would be consumed along with Hitler if they had to align themselves with him. Herself saw young Steven Rogers as the one, despite sharing that information only with Kraken. Fenhoff simply decreed that if Hitler turned out to be "unsavory", Hydra would remove him from power and benefit from the empire he would had built, and Kraken sealed the plan, convinced by Fenhoff and Zemo.[5]

Hydra was subsumed by the Reich, instead of their intent of using the Nazis to further their own goals. The Red Skull virtually took control of Hydra from its leaders, as Fenhoff and Zola had pledged loyalty to him, Heinrich Zemo was dead and the Kraken was in hiding. He forced Captain America to pledge loyalty as well, offering to save him and Elisa Sinclair. Steve reluctantly accepted.[9]

After Elisa informed him that the Allies were building the Cosmic Cube,[9] they went to England where she explained him the full extent of the Cube's powers and what would happen then, urging Steve to join the Pacific theater of the War and meet Kraken.[7]

In Japan, Captain America met Kraken who led him to Ashomia and introduced him to "the Father" Isaac Newton.[1]

As the Allies were using their Cosmic Cube to reshape reality for them to win the war over Hydra, Kraken and the Father briefed Captain America on his future, and he went into Nostradamus' divining pool which protected him from the alteration, sending him into the altered version of himself.[1]

Elisa Sinclair escaped the alteration through unknown means (though she promised to Steve that she would call upon the Elder Gods, consult the forbidden books, and even sell her own soul in order to be reunited with him),[7] and appeared as Madame Hydra in the Allied-altered timeline.[10]

Like this? Let us know!
Retrieved from "https://marvel.fandom.com/wiki/Hydra_(Earth-61311)?oldid=5547966"
Community content is available under CC-BY-SA unless otherwise noted.