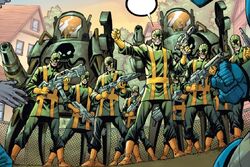 Hydra seemingly had the same history as its Earth-616 counterpart.

Hydra tasked Agent Cole with creating a time travelling armor known as Project Backtrack. During its construction, Hydra's scanners found that a future variant of the suit had arrived in their time. Rushing to Forest Hills, Hydra confronted the time-displaced Chronosaurus Rex, Silk, and Spider-Man. During the subsequent battle, the three were able to escape from Hydra.

Hunting them down, Hydra captured Agent James Harper, whom they incorrectly deduced was Rex, as the time-travelers arrived at his home.

Later, the time travelers, accompanied by Ben Parker, stormed Hydra's Red Hook base in an attempt to rescue James and recharge the Backtrack suit. During the fight, Ines was forced out the suit by Cole who replaced Rex's power battery. James quickly figured out his relation to Ines, denouncing Hydra, and helped in the fight against them. Only Cole wasn't knocked out.[1]

Like this? Let us know!
Retrieved from "https://marvel.fandom.com/wiki/Hydra_(Earth-TRN567)?oldid=5547995"
Community content is available under CC-BY-SA unless otherwise noted.