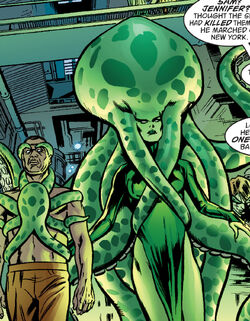 The Hydra are a biological parasite created by Norman Osborn based on information he got from reading the Bloodstone Files. He created the Hydra in order to eliminate the strongest opponents towards his presidency, namely SHIELD and their allies as they would not accept his presidency. Osborn would launch an attack on SHIELD; it would lead to the majority of SHIELD's best agents and allies to be possessed. The Hydra is led by a queen that took possession of the She-Hulk. Others possessed by the Hydra include Timothy Dugan, Gabriel Jones, Valentina Allegra de la Fontaine, Sam Wilson, Blob, Puck, Jessica Drew and Rick Jones.
[citation needed] The Hydra need their host body to be willing to be possessed by the creatures; how the original victims of Hydra were possessed is unknown. The others would be infected due to the Hydra keeping the memories of its victims and its highly manipulative and persuasive group mind.
Following the fall of SHIELD, the Hydra would be a nuisance in New York City, trying to find new hosts for its collective. Osborn would charge the Iron Avengers to destroy them, possibly to remove all trace of them so that he could not be tied to their creation.
[citation needed] The Hydra were seemingly wiped out; however they would resurface again and clash with the Skull's army, where they were also again seemingly wiped out. The Hydra would survive that attack and regroup in the secret lab where they were created. They would be found by Captain America and Mar-Vell who were coming to collect the Quantum Bands that were in Rick Jones' possession. However, it turned out the bands had no power left in them and one was missing. When Mar-Vell revealed to Captain America that the Hydra's killed whoever they took into their collective, Cap used Rom's blaster to banish them to Limbo. Their fate remains unrevealed.[citation needed]

Like this? Let us know!
Retrieved from "https://marvel.fandom.com/wiki/Hydra_(Parasites)?oldid=5312210"
Community content is available under CC-BY-SA unless otherwise noted.