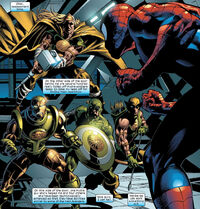 The Hydra Four were Hydra versions of the Avengers sent into Manhattan to cause havoc in an attempt to draw out the Avengers. Only Militant fought his counterpart (Captain America), and although he held his own, he was ordered to retreat, along with the other three.[citation needed]Spider-Man later infiltrated their headquarters, where it was revealed each member has received altered genetics, explaining their strength and abilities.[citation needed]

However, later on the building was destroyed. The Hydra Four are presumed to still working with Hydra.[citation needed]

Weapons: Each member wields a weapon/weapons that is based upon the person they are mimicking. Hammer wields a hammer that allows him to send out EMP pulses, cause electrical surges to mimic lightning, and can be thrown, and return to his hand. Militant wields a shield similar to Captain America's. It is made out of an unknown alloy, but is capable of bouncing and ricocheting off objects and people. Bowman's arrows are known to be trick arrows, among them there are explosive tipped and bolas. Tactical Force has the standard Iron Man repulsors, flight capability, and enhanced strength.

The Super Hydra Agents were created by Hydra to kill the Avengers but failed in the end. In one panel, there are clearly at least six tubes, and when the Supreme Hydra sent them out, he ordered his agents to open "Tubes 1-4", implying that there are other tubes as-yet unopened.

Retrieved from "https://marvel.fandom.com/wiki/Hydra_Four_(Earth-616)?oldid=5548007"
Community content is available under CC-BY-SA unless otherwise noted.