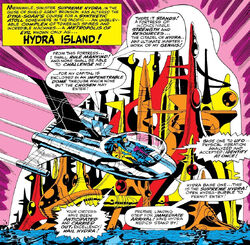 The original island was located 500 miles north of Darwin, Australia. It was defended by a series of booby traps, including land mines, poison darts, and hidden pits. Below the surface was a submarine pen and facilities which included surface monitoring periscopes, control rooms, and prison cells. Reports of a "phantom submarine" brought both the Leatherneck Raiders and the Samurai Squadron to the island.

Where they had to contend with the booby traps and then each other, after which most were captured by Baron Strucker. His men searched for Captain Savage and Sgt. Morita, whom eventually evaded their pursuers and rescued their men. Being overmatched, Strucker fled and had the island self-destruct.[3]

The reconstructed Hydra island was an artificial island.[4] It was surrounded by an impenetrable shield (dome). Which was designed to protect the inhabitants from the Death Spore virus that Hydra planned to unleash on the world. From the island, Baron Strucker made a broadcast, demanding that the nations of the world surrender or die.

Nick Fury infiltrated the island but was then captured. He managed to escape, fought his way through Hydra agents, and brought about Strucker's death. After which he detonated the Death Spore virus inside Hydra Island. Trapped within the shield, it killed the Hydra agents and sank the island.[5]

Like this? Let us know!
Retrieved from "https://marvel.fandom.com/wiki/Hydra_Island?oldid=5839413"
Community content is available under CC-BY-SA unless otherwise noted.