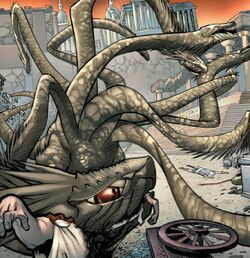 When Hercules fought against the Lernean Hydra as part of his Twelve Labors, he cut many of the monster's heads off in order to defeat it.[1] Some of these heads managed to roll off and grew new bodies, becoming entirely new Hydras. One of them was put down by the Eternal Ikaris, while other fought Hercules in Lerna about a year after the original had been defeated.[2]

A Hydra capable of speaking fought Hercules and the Argonauts during their Quest for the Golden Fleece.[3]

An example of Hydra could be found at the exhibit halls of the Collector's Museum.[4]

A Hydra was sent by Ares to attack Hercules for stealing his Mace of War. When the Hydra assaulted the New Avengers' base of operations at the time (the Wakandan Embassy), where Hercules was present, they had difficulty in bating it as it came back with twice as many heads; however, Hercules was able to send it into the Stygian depths of the Underworld with a hit of the Mace of War.[5]

Seemingly those of their progenitor.

Seemingly those of their progenitor.

Like this? Let us know!
Retrieved from "https://marvel.fandom.com/wiki/Hydras?oldid=6098247"
Community content is available under CC-BY-SA unless otherwise noted.