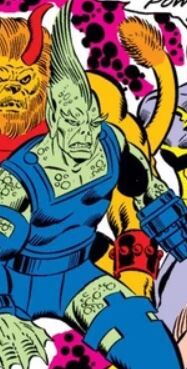 Hydron was on a team of magical supervillains called Salem's Seven. They were foes of the Scarlet Witch and the Fantastic Four. All seven were the children of Nicholas Scratch and the grandchildren of Agatha Harkness. They were humans with magic powers who could transform into fantastic creatures with super-powers.[1]

Hydrokinesis: Transforms into bipedal merman who can fire controllable streams of water from the stump-end of his left arm.

Like this? Let us know!
Retrieved from "https://marvel.fandom.com/wiki/Hydron_(Salem%27s_Seven)_(Earth-616)?oldid=5475759"
Community content is available under CC-BY-SA unless otherwise noted.