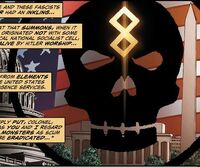 ICON was an organization formed by Undersecretary Geoffrey Sydenham and Senator Sanford using Operation Paperclip to recruit former Nazis and use them against the communists.

The team came into conflict with that era's Avengers, after unsuccessfully attempting to assassinate their ranks. When the conspiracy was discovered the organization was disbanded, but none of the members were imprisoned because the American government didn't want to admit that the group had any connection to them.[1]

Retrieved from "https://marvel.fandom.com/wiki/ICON_(1950s)_(Earth-616)?oldid=5548020"
Community content is available under CC-BY-SA unless otherwise noted.