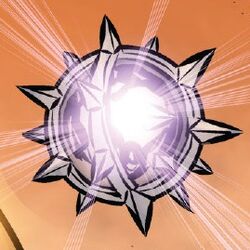 The ISO-Sphere is a powerful artifact that is capable of rewriting reality and granting its wielder any wish.[1]

The Collector has claimed that the Iso-Sphere grants its possessor enough power to rival gods.[3]

In Earth-15513, the Iso-Sphere is the most potent form of the Neutronium in its Iso-8 form.[3] The Elders of the Universe waged in a Contest of Champions for its possession, a game in which different individuals they abducted from across the Multiverse fought to the death of behalf of each Elder.[2]

Near the end of the contest, only two contestants remained, Maestro and the Punisher, representing the Collector and the Grandmaster, respectively. As part of a secret scheme to acquire the entire power of the Iso-Sphere for himself, Maestro proposed the idea of a refined and new Contest of Champions, in which Maestro and the Punisher would act as summoners and choose several new players to play on each Elder's behalf.[2]

With each battle the new players fought, the percentage of the Iso-Sphere each of the remaining two Elders possessed varied.[3] When the Grandmaster found himself with only a sliver of the Iso-Sphere, Maestro attacked him and stole his portion, which still didn't rival in power the amount of Iso-Sphere the Collector possessed. However, the two portions of the Iso-Sphere desired to be with each other, prevented only by their owner's will. In a battle of minds, Maestro trumped the Collector's desire to possess the Iso-Sphere and acquired its entirety.[2]

The Iso-Sphere was snatched from the Maestro by Outlaw when he was distracted fighting other contestants. Outlaw's desire to use the Iso-Sphere to return everyone to their normal lives and end the contest overpowered Maestro's, and the Iso-Sphere shattered as it teleported the contestants to wherever they wanted to be, and Maestro to a cell in the Collector's Museum.[4]

Retrieved from "https://marvel.fandom.com/wiki/ISO-Sphere?oldid=6437854"
Community content is available under CC-BY-SA unless otherwise noted.