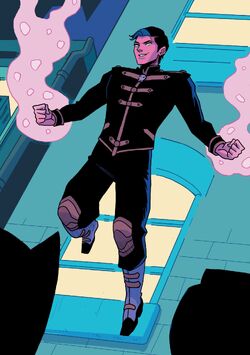 Ian Soo was just a young New Yorker being pushed around by his lazy and bossy girlfriend Zoe Valencia, who was part of a delinquent female gang. Once he received telekinetic powers from the Terrigen Mist cloud, he blacked out for three days and when he woke up, Zoe had packed Ian's stuff in boxes. She wanted him to leave their apartment, before going herself.[1] At loose ends in his life, he decided to become a super-criminal and committed a robbery as the "Telekinian". He was stopped by Hellcat, who decided to help Ian turn his life around, and they became roommates.[2]

Ian is a human with latent Inhuman heritage whose powers were activated by the Terrigen Bomb:

Like this? Let us know!
Retrieved from "https://marvel.fandom.com/wiki/Ian_Soo_(Earth-616)?oldid=5342587"
Community content is available under CC-BY-SA unless otherwise noted.