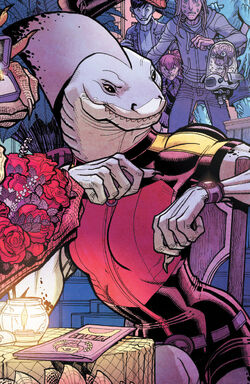 Iara dos Santos was an average Brazilian girl until she began having a strong craving for fresh fish and transformed into a Were-Shark. Shortly after her powers manifested, both Angel and Mystique attempted to recruit her to their respective causes. Iara initially refused both of their offers, prompting Mystique to try to take her by force. Angel was able to rescue Iara and brought her to the Jean Grey School for Higher Learning, where she later decided to enroll and live part-time while returning to Brazil on the weekends.[2]

She was among the students to go in the Frankenstein's Monster's Murder Circus. She battled a mind-controlled Warbird and zombie clowns.[3]

Iara was one of the many mutants that opposed the crazed X-Man from remaking the world in his image. When X-Man realized that his vision of the world would never come about with the X-Men around, X-Man made his enemies vanish in an instant, including Iara.[4]

Iara and the others were transported to another plane of existence by X-Man created in an attempt at a utopia where they and all other mutants would be at peace, altering their memories so they wouldn't resist.[5]

Iara became a student of the Summers Institute for Higher Learning and was a member of its Agricultural Division. Iara was at lunch with the rest of her friends when she mentioned to everyone that Glob wrote fan fiction and that his stories involve all of them as X-Men going on adventures and having battles with bad guys. After the fuss caused by Pixie when she took Glob's notebook away from him, they all decided that after school they would go to the library to study.

Iara was in class with Glob and Gentle as their teacher, Ms. Guthrie, was explaining to them why it was so important for the agricultural department to take care of the produce and livestock, as this was an essential part that the community depended on.

Iara and the others met up at the Hope Summers Memorial Library to study for school when Rockslide noticed a huge fire off into the distance. Iara, along with the others, were left behind by Armor and Pixie, who went to investigate the disturbance, as that was what they were training for in the Civil Management Division. Not wanting to stay put, Iara followed them to the fire.

Iara stood in front of the house while it was burning down until she looked up in the air at the sudden appearance of the X-Men arriving to deal with the situation.[6]

While not seen, Iara was presumably allowed to return to the real world when X-Man decided to release the mutants he trapped in his reality.[7]

Iara later became a citizen of the mutant nation of Krakoa. She celebrated along with its other citizens when Krakoa was officially recognized as a nation.[8]

Iara is a new mutant activated after the Phoenix dispersion and has displayed the following mutant powers:

In her shark-form, partial or total, Iara can lose control of her body, submerged by shark instinct such as blood hunger.

Like this? Let us know!
Retrieved from "https://marvel.fandom.com/wiki/Iara_Dos_Santos_(Earth-616)?oldid=5741461"
Community content is available under CC-BY-SA unless otherwise noted.