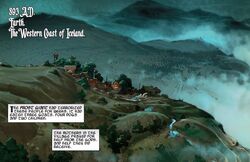 Iceland is a country of northwestern Europe, comprising the island of Iceland and its outlying islets in the North Atlantic Ocean between the rest of nd Greenland. Its capital and largest city is Reykjavík.

In 893 A.D, on the western coast of Iceland in the village of Kolkumyrar was attacked by a group of Frost Giants . The villages prayed for help and Thor came to their rescue slaughtering the Jotuns. The villages celebrated with Thor until they found a body wash up in the stream revealing it to b an Asgardian. Thor decides to return to the celebration as the villages collected wood for a funeral pyre to burn the body.[1] After the celebration Thor was woken from his slumber by a mysterious voice, but finds nothing.[2] He would regularly return to the village to live among the people as he respected them due to ability to live through such hardship.[3]

Psylocke, Storm, Longshot and Diamondback in Dazzler's body were transported to Iceland. In their minds, they see the image of a small rock and figure it is the object they have been sent to retrieve. They are attacked by the Serpent Society. Longshot used his uncanny luck, to find the rock. Rattler tries to dislodge the rocks at Longshot’s feet to bring him and it sliding down. The result is an avalanche that buries Rattler and Longshot. Storm and Psylocke try to dig him free while Diamondback grabs the rock. At that moment, the three of them are teleported away.[4]

In Iceland, the Agents of Atlas faces a group of rogue agents, who have gained control of a crowd of giant monsters. Though Namora and M-11 do the most damage against the monsters, it is ultimately Venus who saves the day again.[5]

Thor (Jane Foster), Hulk (Amadeus Cho) and Maddy Cho visited the Secret Dwarven Outpost to investigate a theft. The Dwarves of Nidavellir blamed the Hulk for the theft of their stash of Uru metal. It had been taken by the Amora, the Enchantress and a group of Dark Elves they and was using Eyjafjallajokull as a forge to create weapons. The heroes confronted them and she tried to bribe Cho with a an axe. He took the weapon but used it against them take them down and returning the Uru to the Dwarves.[6]

On Earth-1610, in 1945, US troops attacked a fortified German facility in Iceland containing a prototype nuclear. Captain America leapt on the missile and stopped it before it could hit the US.[7]

Like this? Let us know!
Retrieved from "https://marvel.fandom.com/wiki/Iceland?oldid=5123240"
Community content is available under CC-BY-SA unless otherwise noted.