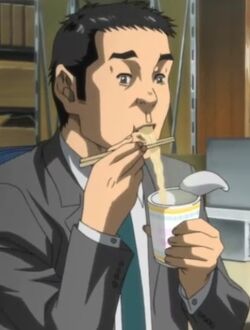 Ichiro is a cameraman for Tokyo's Journal, and Nanami Ota's partner.

He boss of both sent them to find some good news and they both left. They both found Tony Stark and Nanami accidentally almost fell, but Tony avoided him and she slapped him for trying to flirt with her.[1]

He and Nanami went out to look for Tony outside of Parliament. Tony got into Nanami's car and Ichiro greeted him. Tony thought he was her boyfriend, but Nanami said he was just her cameraman and she chatted briefly with Tony and he got out of the car. In his partner's car, he saw Tony crossing quickly in his car and reported it to his partner who followed Tony.[2]

Ichiro was eating and Nomura got angry by assuring him that he didn't pay him to eat.[3]

Nanami interviewed the injured Kawashima and got angry at Ichiro for eating the fruits that she brought to Kawashima.[4]

Like this? Let us know!
Retrieved from "https://marvel.fandom.com/wiki/Ichiro_Masuda_(Earth-101001)?oldid=5961324"
Community content is available under CC-BY-SA unless otherwise noted.