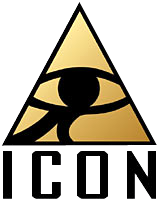 Icon Comics is an imprint of Marvel Comics that was started in 2004, with the release of Powers #1 and Kabuki #1, after both titles had moved from Image Comics. Much like the earlier imprint Epic Comics, Icon features creator-owned properties.

The Kick-Ass property from Mark Millar and John Romita, Jr. has been turned into a multimedia franchise, featuring 2 films, Kick-Ass released in 2010, and a sequel released in 2013, and a beat-'em-up video game, Kick-Ass: The Game, released on the Apple Apps Store and the Playstation Network.

Retrieved from "https://marvel.fandom.com/wiki/Icon_Comics?oldid=5060112"
Community content is available under CC-BY-SA unless otherwise noted.