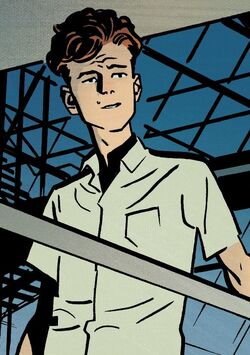 [I am] the brains behind the muscle. The mastermind behind the decoy front. My name is Ilija Knezevic. The true Weeping Lion. I know what you're thinking. No. I mean it. I'm not exaggerating. I literally know what's in your head, Natasha Romanoff. I'm a telepath.

When he was a kid, Ilija Knezevic's cousin and uncle were attacked by Red Room operative Natasha Romanova. Ilija's uncle died, his cousin barely made it out alive, and Ilija was uninjured due to Romanova having failed to notice him sleeping in the back seats of the car they were driving at the time of the attack.

As they reached adulthood, Ilija and his cousin took over his uncle's criminal operations.[2] Knezevic became an intelligence gatherer, using his telepathic abilities to mine secrets from the minds of his victims with blackmailing purposes. He became the man behind the curtain while his cousin was the face and muscle of the operation, known as Platch Liev.[1] They also investigated the killer of Ilija's uncle, who had grown up to become the Avenger Black Widow.[2]

When Ilija found the former Headmistress of the Red Room to be out of his reach,[3] he retrieved numerous compromising records about Black Widow and had his brother abduct her and subsequently blackmail her into obtaining the details of the Headmistress' new terrorist program known as the Dark Room.[4]

After she retrieved the files,[5] Knezevic had her go to a transfer zone to have a courier retrieve them.[6] When the files were destroyed as a consequence of the intervention of S.H.I.E.L.D. agent Elder, Platch Liev proceeded to broadcast the secrets of Black Widow's records through every media outlet possible.[3]

While on the run, Black Widow managed to access the Parisian offices of Tony Stark and track down a serial number she had memorized of a Stark Industries shipping crate from Platch Liev's hideout. Now armed and ready, she traveled to the serial number's address, and confronted and subdued Ilija's brother. Ilija's revealed himself as the "true" Platch Liev in order to prevent Black Widow from killing his brother. Even though there were no other compromising records on the Black Widow, Ilija threatened to use his telepathic abilities to dig information directly from Black Widow's mind. To his surprise, she had outfitted herself with a protective earpiece that prevented telepathic intrusion and a repulsor gauntlet she used to blast Ilija through his base's window, and made it clear that he was going to work for her from then on.[1]

With Ilija's unwilling help, Black Widow infiltrated the relocated Dark Room to try to rescue the children under the Headmistress' tutelage. The duo confronted the Headmistress, who had already dispatched the trainees. Ilija tried to telepathically take the information of their locations, but the Headmistress shot herself in the head before allowing her secrets to be revealed. When Natasha asked him to work on the Headmistress' daugther Recluse, Ilija claimed that she knew nothing.[2]

He had most likely lied, as his brother later got hold of five of the Headmistress' trainées and kept them under captivity at their base.[7] One of these girls was ordered by Knezevi to infiltrate the spaceship Black Widow used to travel to the Moon in order to visit the Unseen, accompanied by the Winter Soldier and Ilija himself. Once they were on the Moon, the girl was supposed to hijack the ship and leave with Ilija, abandoning Black Widow and Winter Soldier on the Moon. Before putting the plan into motion, Knezevic tried to use his telepathic powers on the Unseen. The overload of information caused his brain to explode.[8]

Telepathy: Ilija has stated to be a telepath, the strength and reach of his powers is unknown.[3]

Like this? Let us know!
Retrieved from "https://marvel.fandom.com/wiki/Ilija_Knezevic_(Earth-616)?oldid=6098900"
Community content is available under CC-BY-SA unless otherwise noted.