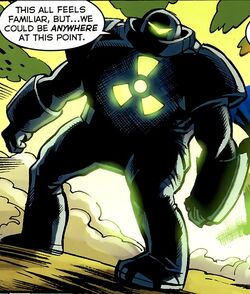 Illarion Pavlovich Ramskov (Russian: Илларион Павлович Рамсков) is a Russian soldier who was mutated by exposure to the faulty controls at Chernobyl nuclear facility. While being treated in New York, he was labeled Powersurge after escaping and causing danger to civilians with this nuclear radiation. He was encased in a containment suit to maintain his energy levels.[citation needed]

Ramskov later joined the Winter Guard as Powersurge. But left after the death of Darkstar and joined the Protectorate.[citation needed]

The Protectorate eventually entered a temporal anomaly and found themselves trapped in Limbo where they fought Dire Wraiths under the service of Immortus. Here they discovered that Fantasia was actually one, but before they could capture her, she escaped back to Earth. The Protectorate followed her back but she had already created an army with the help of The Presence. They stormed her base and fought their way to Fantasia. Powersurge used a device capable of destroying the Dire Wraiths to defeat them. Crimson Dynamo then amplified the devices energy and opened a portal back to Limbo and threw Fantasia back inside it at the cost of the device being destroyed. With Fantasia defeated, The Presence attacked them with radiation, but Powersurge, being immune to it lunged at him. When Powersurge's containment suit tore open, he reacted to the Presence's energy, and this resulted in an explosion which destroyed the Winter Guard's base.[1]

Like this? Let us know!
Retrieved from "https://marvel.fandom.com/wiki/Illarion_Pavlovich_Ramskov_(Earth-616)?oldid=5482276"
Community content is available under CC-BY-SA unless otherwise noted.