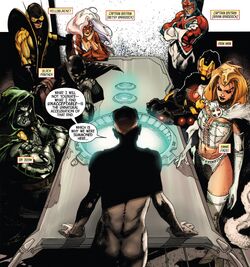 Base of Operations
Necropolis, Wakanda
Affiliations

The Illuminati were a secret society of powerful men and women dedicated to protecting their world. At some point, they learned of the incursions, and attempted to stop them.

After analyzing the mutants, who they deemed a threat, they created gene specific neutralizers in moments, killing all the mutants, including the Illuminati's Emma Frost and Betsy Braddock, before preparing to harvest the planet. They offered the Illuminati amnesty, telling them to flee, but the Illuminati refused and engaged them in battle. Black Panther and Yellowjacket were killed almost instantly, while Iron Man and Captain Britain (Brian Braddock) were captured and incapacitated. Doctor Doom succeeded in destroying one of the Mapmakers, to the surprise of his fellows, but was then killed, after being saved for a few instants thanks to Reed Richards' sacrifice.[1]

Transportation: Their own powers or self-propelled suits. Fantasti-Car.

Retrieved from "https://marvel.fandom.com/wiki/Illuminati_(Earth-2319)?oldid=5548026"
Community content is available under CC-BY-SA unless otherwise noted.